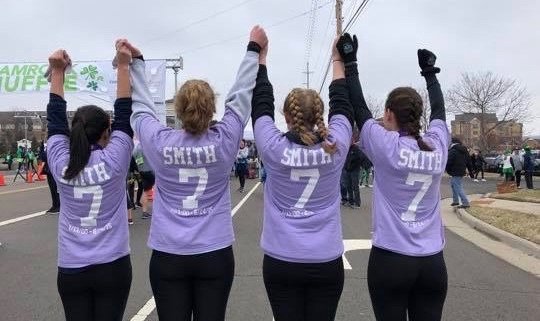 The official race title is the Shamrock Shuffle. But, for my family, it’s the day we get together to memorialize Shayna.  For us, it’s Shayna’s Shining Stars Walk. During the gatherings at Thanksgiving, Christmas, etc. we all think about Shayna. Some of us talk about her. Some of us avoid talking about her. This day is all about Shayna. Just as she would have it. Before Shayna passed we were somewhat associated with the Shamrock Shuffle, a 5K and 10K for charity. One year her Girl Scout troop did a project at the event and they asked me to be the photographer. But, since she has crossed over, we have used the event to raise money for her scholarship fund. Our neighbors, family, and friends contribute and over forty participate.

Tywana’s whole family, with the exception of her brother Eric, tries to make it into town for the race. Kayla comes down from Toledo for the weekend. From my side, only my brother Brent’s family comes- he, his wife and his four children. Last year, my cousin planned a party for our fathers the day of the race. This year, another cousin’s wedding was in Dallas on the same day. I’ve chosen to be here for Shayna’s Day instead of attending these events. This year, for the first time, Tywana’s sister and her family can’t make it. My brother has gone to Dallas for the wedding. Normally, we have a house full of people sleeping over on the eve of the race. This year it’s just Kayla and her boyfriend spending the night.

We have the traditional pasta party at our house the night before the race. Kayla is working late. So, she doesn’t get in until around 10 PM.

In spite of the no shows, we have 42 people on the team this year. Race day weather is iffy, as is the tradition. It’s Ohio, in March. At race time it’ about 35º without a hint of sunshine. There’s a light breeze. At least it’s not raining. Before the race we meet several members of the team at the clock tower for a photo. There aren’t enough at the house to get the traditional photo on the steps. Four of the Shayna Six, as a few of Shayna’s friends call themselves now, show up in their purple Smith t-shirts. Four years after her passing and a year after their graduation and they still show for her.

As the time for the race draws near, we line up for the start. I put in my earphones and get ready for the start. There are 2,300 people here. But, I walk alone. I don’t want to talk to anyone. When I do the race, I commune with Shayna. The runners sprint way out ahead of me. The people socializing during the race are behind me. I speed walk in the middle of the pack, thinking of my girl, grateful that forty friends, family, and neighbors spend their money and take their time to help us remember her even four years after her leaving her body.  I take each step bringing me one step closer to the finish line and think of it as one day closer in my journey back to Shayna. I wish she could be here. But, then it dawns on me if she were here, we wouldn’t be here. I’d still trade all of this to have her back though. She’d be a freshman at my alma mater, OSU.

Four of the Shayna Six

After the race, we head home and have breakfast. I make waffles for the crew. Everyone leaves early leaving just Kayla, her boyfriend, Tywana and me.

We watch a movie and it’s time for bed. Kayla goes to let the dogs out the front door and comes back and asks “Do hummingbirds come out at night?” I tell her I don’t know since if they did we couldn’t see them. I’ve never seen one at night. She then says that she saw a hummingbird hovering on the front porch as she let the dogs out. This is early March in Ohio.  Hummingbirds are rare here, even in the spring and summer. They migrate South during the winter. There is no doubt it’s still winter. There should be no hummingbirds here. I haven’t seen a hummingbird since at least September. I’ve never seen one at night.

This morning, I take my seven-mile walk. I spot first a female cardinal, then a few minutes later a male cardinal. They both cross directly in front of my path. Several minutes later I look up and I see a heron high overhead. I see herons very rarely here. I think I’ve seen four in over twenty years, all within the last several months. Shayna sends birds to us as signs often. A hummingbird in March, two cardinals, a heron all in less than twenty-four hours. Thanks, Shayna! I hope you like what we did for your walk this time.

This is a heron.