Yesterday afternoon I was on Suzanne Giesemann’s radio program- Messages of Hope. I’ve known Suzanne for almost three years. Our paths have crossed at three conferences, including where I first met her at one of her workshops. Shayna drops in on Suzanne and gives her messages for us from time to time. Suzanne has featured Shayna in one of her presentations over the last couple of years.

Whenever we talk to Suzanne, Shayna makes her presence known. Before we started the interview Suzanne asked me if anyone in our family had been having an issue with a tooth. She said she saw someone flossing. I hadn’t been to the dentist for several years. We recently got dental insurance again. So, I went to the dentist a few weeks ago. I had a filling that needed to be replaced. Two weeks ago, to the day, I had that work done.

Suzanne said she saw Ty wrapping herself up in something, throwing it around her shoulders. Ty loves shawls/scarves/blankets. She has several “scarves” that are really more like blankets. I told Suzanne this makes sense. It’s cold in our house in December. Ty is always under a blanket. Suzanne asked me if she had gotten a new shawl recently. I didn’t know. I told her I would check into it. Ty received a new shawl in the mail yesterday, unbeknownst to me. 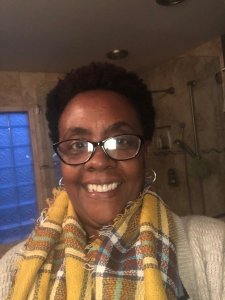 Suzanne asked if I had received a sign with a rainbow lately because Shayna was showing her me and Shayna together with a rainbow. I have received many rainbow signs from Shayna. So, this made sense. Last night when I took Stevie out for the last time of the night, as I was saying good night to Shayna, I looked up and saw this. It didn’t photograph very well on my phone. There is a distinct ring completely around the full moon.

Here is the episode: