Christmas 2020 it’s the sixth Christmas since Shayna passed away in June of 2015. Over the years, I’ve learned not to anticipate Christmas as much as I used to-, whether I’m expecting it to be good or bad. Let’s just wait and see what the day brings is my new motto. Expectations lead to disappointment.

I’ve learned that every Christmas is different. Being a small child and getting excited about the toys I would get faded as I got older. The joy experienced vicariously through my girls waned, even before Shayna passed away. There was no more staying up all night putting their toys together and preparing the milk and cookies for Santa. They began sleeping in on Christmas morning.  Christmas evolved into a lazy day with a special breakfast and seeing a movie in the afternoon.

This year it’s Covid-19. We can’t even get together with our families. Last year we went to Nashville after Christmas and spent a few days hanging out. We thought it might become a new tradition. But, there’s no traveling this year.

Kayla is back with her boyfriend Gabe, who is in Cincinnati for an internship. He couldn’t travel to his home in Michigan because he’d have to quarantine for 14 days on his return. So, she and he spent Christmas Eve and the next two nights with us. It’s a different configuration than we used to have. Kayla has another friend, Darrenton, who would have had to spend Christmas alone for the same quarantine reasons since his family is also out-of-state. So, he joined us for Christmas dinner.

Kayla and I kept our 24-year tradition of getting a “Snow Baby” ornament. Christmas Eve, she, Gabe, and I went to the only place in town that still sells them and chose one.

I took my 7-mile hike even though the temperature had dipped drastically to about 15 degrees for Christmas. It was an eerily solitary walk. I think I saw a total of five cars on the road in an hour and forty minutes. The sky was utterly overcast, without even a hint of sun. But, it felt good to be up early and get my walk in before everyone else rose.

Christmas morning, we had our traditional breakfast of breakfast casserole, sweet rolls, and fruit salad. We also had mimosas for breakfast. We opened presents a little bit later on and watched a couple of movies. I  started watching Life of Brian which I jokingly call a Christmas movie because it’s about the birth of Jesus, and Brian is my namesake.

Of course, for dinner, we had to have deviled eggs; Shayna’s favorites. I made a prime rib, which I did sous vide style. Since we had extra guests, I wasn’t sure if there be enough food, so I also poached some shrimp in garlic and lemon and butter. I made cranberry salad; Kayla’s favorite and my favorite. And we roasted some vegetables. 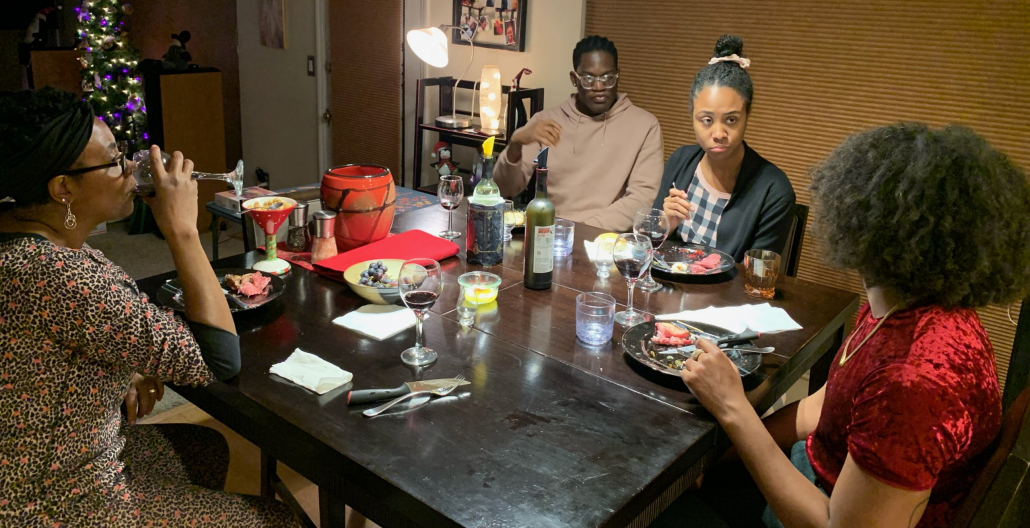 It was fun having Gabe and Darrenton here. They added some new energy to the experience. We watched movies again on Christmas night and turned in, the dreaded day behind me once again.

Tywana and I have decided not to give each other presents for Christmas anymore. We each get what we want when we want it. She usually ramps up her purchases around Christmas. This year she bought a spin bike, a cadence monitor for it, etc., etc.

While Kayla was opening her presents she opened a bottle of Eagle Rare meant for me. I was pleasantly surprised because it’s one of my favorite bourbons and I haven’t seen a bottle since exactly a year ago when I found three bottles in a store in Nashville.

Here’s where the sign comes in. I don’t look for signs on big days because I don’t want to be disappointed. Somehow though it seems Shayna always comes through. I never know what it’s going to be. It could be an electrical glitch, a song playing on my iPhone, a cardinal, a coin, a chance encounter with a person, anything really. As I took my walk in the morning, I didn’t see much of anything. It was bitterly cold. Even the squirrels and the birds seemed to be in hiding.

Tywana hands me another box. I remind her that I didn’t buy anything for her and I open it. It’s a bottle of Blanton’s single barrel bourbon.

Let me explain why this is so amazing. A few weeks ago I discovered a Facebook group that has the sole purpose of posting what they’re selling at Buffalo Trace that day. Buffalo Trace is a distillery in Frankfort Kentucky a couple hours from where we live. The products are highly sought-after. Many of them you just can’t buy as in you cannot find them. In the gift shop each day they sell some of their hard to find products. But, it’s random. You never know what they are going to have. So every day someone posts what they have for the day so you can make the trip and have a shot at getting it. I just discovered this group about a month ago. I told Tywana one day when they had Blanton’s I was going to get in the car and drive down. I’ve never had bottle of Blanton’s. When I lived in Lexington over 20 years ago, it was readily available but more than I wanted to spend on a bottle of bourbon. The last couple of years I’ve had my eye out for it but never saw it on the shelf.

I told Ty about the group and she asked why I didn’t have her brother get a bottle for me. He only lives about 20 minutes away from Frankfort and could get it pretty easily. I knew it would be a mad rush before Christmas to get a bottle. So, I decided to wait until after Christmas to make the trip.

So, here I am looking at this bottle of bourbon I’ve been wanting for years and just found out a few weeks ago I might have the chance to get. I take it out of the box and look at the details. Each bottle is bottled from a single barrel. So, the warehouse and even the shelf the barrel was on is printed on the bottle. What’s also on the bottle is the “dump date”.

The dump date is the day the barrel is dumped to be bottled. Some people spend a lot of time looking for specific dump dates- their birthday, an anniversary, things like that. As I look at the dump date, it hits me. It was bottled 11-3. November 3rd, the day of our anniversary. Even more, it was dumped 11-3-2020, the very day of our 30th wedding anniversary. There’s my sign!

Christmas Day is over. Kayla and her boyfriend stay. We have nachos for dinner on Saturday and watch the Disney/Pixar movie Soul. It’s that weird limbo week between Christmas and New Year’s when everyone is usually off of work. But, since no one can go anywhere due to Covid, Kayla isn’t taking off of work. Ty’s not working right now. So, I figure on Monday I’ll just get back to the grind.

Soul is a fantastic movie about the Journey of the soul. I love the fact that there are no religious overtones to it at all. It matter-of-factly presents how a is formed, how it progresses, and about a life’s purpose. There is a great deal in there about the astral plane and being in your zone. They touch on soul guides. The animation is out of this world. After that, because I got in Disney+ to get Soul Kayla noticed that Inside Out was available. Inside Out came out just a couple of weeks after Shayna passed away.  Tywana and I saw it at the theaters.  We saw it just to get out of the house. But, it was too soon. I just sat in the dark and cried the whole time because I could not get my mind off of Shayna. I felt like I didn’t get much out of the movie. Then, I couldn’t bring myself to watch it again over these last five years because it reminded me too much of that time right after Shayna transitioned.

Kayla said she wanted to watch it. So, I sucked it up, put on my big boy pants, and watched.  I’m glad I did. Inside Out is about no emotions and how emotional development works. It’s extremely deep like all Pixar movies- ostensibly for children but touching being human on a level that is surprising.

Monday, January 4th, Kayla went back to her place. She put away her Snow Babies. I have to admit I’m a little sad that Christmas is over. We couldn’t go to the theater. So, we brought the theater to us. We had fantastic meals. I got my first ever bottle of Blanton’s bottled on the day of my 30th anniversary. 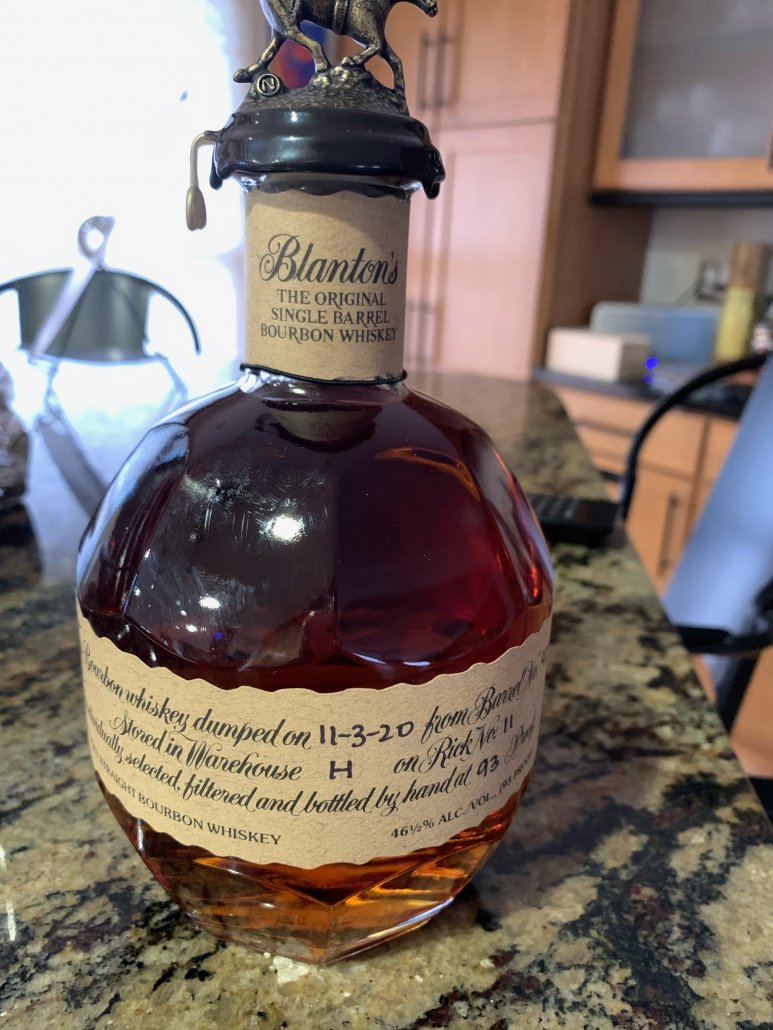 New Year’s Day has now come and gone. We did a four-hour Zoom with our neighbors. Every year for the past 23 years we’ve spent New Year’s Eve with the same couples. First, it was having our children do sleepovers in the living room while we rang in the New Year. This year, because of Covid, we thought we’d miss out. But, we decided to see what it was like to get together over Zoom. We started at 9:30. Finally, around 1:30 AM we all decided to sign off. While we couldn’t be together physically, our spirits were together and we rang out 2020 and rang in 2021 with joy in our hearts.

Stay Up to Date