Juneteenth was Saturday, Father’s Day and the summer solstice was Sunday. It was a big, big weekend.

For the first time since 2019, we headed up to Columbus to see the entire family. I hadn’t seen Brandon or Bridget since 2019. Brent, I had seen twice, socially distanced. My parents, I had not seen since 2019. Our family took the virus and the social distancing extremely seriously. Freedom #1- reuniting with family.

Since I picked up my BMW last weekend, it was my first time to get to drive it on the open road. I made the mistake of following the GPS and taking I-71 to Columbus (a horribly maintained road). In spite of that, the trip was good.- Freedom #2- owning the car I’ve wanted for over three decades.

As a surprise to Kayla, Tywana and I paid off her student loans, in full. She was fortunate and scholarships paid for a good chunk of her undergraduate degree. We paid half of the remaining half for the first four years. She took out loans for the remainder. We filled in the gaps for her fifth year and for her graduate program. I hate that kids come out of school in debt sometimes multiples times their annual salaries. I did not want that for Kayla. As it turned out, her student loan debt was about three-quarters of what her first-year salary will be. That’s still something that would have taken her years to pay off.- Freedom #3 and the biggest one!

We paid off her loans on June 4th. But, I wanted to let her know on Juneteenth, the day Black Americans celebrate the end of slavery. In a very American way, it was over two years before the enslaved people of Galveston, TX got the news they had been freed. So, I gave Kayla a graduation card with this note in it:

On June 19, 1865, the enslaved people of Galveston, TX received the news that they had been freed, two years prior.

On June 19, 2021, two weeks later, Kayla received the news that her student loans had been paid in full.

It’s so important to me to give Kayla a great start. She is sacrificing salary to serve kids in counseling and she’s expressed concern about that. Her loans were deferred while she completed school. But, it was coming time to pay the piper. By giving her my Mazda 6 and paying off her loans, at least she’s starting out her career debt-free. As an African-American father, this is extremely important to me because it’s not often we can give our kids a great start.

For Father’s Day, all I ask is that I be allowed to watch the US Open. And, that’s precisely what I did. After we got back from Columbus, Kayla stayed the night and spent Father’s Day with me. Tywana was going to make one of my favorites, Mediterranean spaghetti. But, I wanted something different and since we had had so much beef over the last week, I decided to make a seafood meal. I got sushi for an appetizer, escargot, lobster tails which I poached in the sous vide, and grilled shrimp. I made smashed roasted baby potatoes, and Tywana stir-fried the fire-roasted vegetable medley from Costco. We had Bridget’s German chocolate cake for dessert. 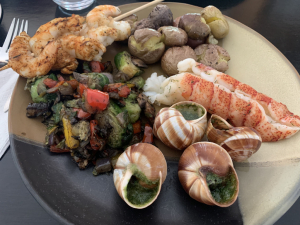 After dinner, Tywana and Kayla cleaned out both cars, transferred Kayla’s stuff over from Leroy to the Mazda, and she took the Mazda home with her for the first time. I wistfully looked at Leroy, as the girls named my Lexus, sitting on the street again this morning. He will only be with us for a few more days. I got Leroy a few weeks after Shayna was born. The girls grew up riding in that car. I drove him for 14 years. Kayla drove him for 7. Many, many memories were made with Leroy. It will be bittersweet letting him go. Selling Leroy will be just another reminder that nothing on this plane lasts forever. Time keeps on ticking into the future, as Steve Miller said.

Image by Wynn Pointaux from Pixabay