My friend, Carolyn Clapper, isn’t just your ordinary medium or medical medium even. Carolyn is off-the-charts good at mediumship and figuring out medical ailments in others. A newly discovered talent is Carolyn can communicate with Shayna to figure out the word of the day in Wordle. It’s not exactly a practical ability. But, for me, it’s just one more indication the connection is real. Carolyn rightly figured out that the shower door in our bathroom had shattered (apparently, Shayna had something to do with it). She gave me a reading where she described what is in Shayna’s room on the dresser, what my wife had had for lunch the day before (I didn’t know, and details about my friend’s wife who had passed just a couple of days before (again that I did not know).

In case you’ve been living under a rock, Wordle is a game where there is a five-letter word every day. There are no clues. You guess a five-letter word and the computer tells you which letters you have right and which are in the right positions. Carolyn got curious after seeing me post my score every day and decided to play.

Carolyn’s first guess was “W-A-T-E-R”. She got this from Shayna. The first three letters were correct and were in the correct places. The last two were incorrect. Then, she got WAT-CH.  Watch was the word for the day. Her score, a 2. Carolyn was disappointed she didn’t get it in 1 guess. For context, I’ve played 64 times. I have gotten it in 2 twice.

Fast forward to the next day. Carolyn asked Shayna for the word this time. She typed in T-O-D-A-Y. The word was TODAY. She got it in 1.  Again, for context, I’ve played 64 times. I have a grand total of 0 times I’ve gotten it in 1.

Is this proof mediumship is real? Of course not. But, for me, it’s not one or two or three things that convince me that mediumship is real, it’s dozens at this point in time. I’ve had many medium readings. I’ve had drop-ins from Suzanne Giesemann where she will call with something Shayna said and give us amazing evidence to back up her message. I’ve had messages from lay people. And, this little thing from my friend Carolyn who has no reason to deceive me about this. She sees Shayan and she delivers amazing messages from her to me. I am so grateful for these things that boost my spirits and my confidence. 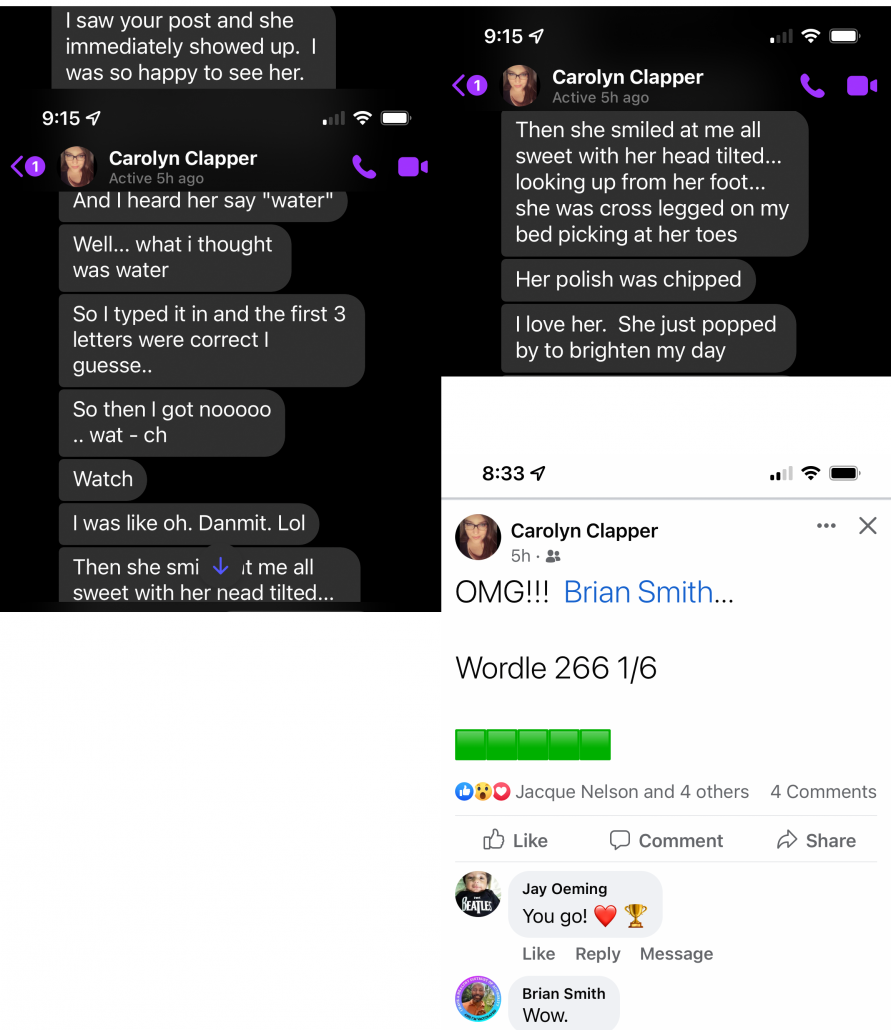